nilgai history or boselaphus tragocamelus information Nilgai is a large and powerful animal. The male Nilgai is similar to a horse in height, but its body texture is not as balanced as that of a horse. It feels extremely awkward when running from the front to the lower part of the face. He does not get the speed of other antelopes.

Therefore, he is easily preyed on by tigers, leopards and sonkutas, though it is not easy for a tiger to kill a large male. Chhawans carry hyena and jackals. But many times in the open, dry regions of his stay, he does not have to fear any predators because he can live for many days without drinking water, whereas predators have to drink water daily. Hence predators rarely go in such arid regions.

Top type of Flour Mill and its use 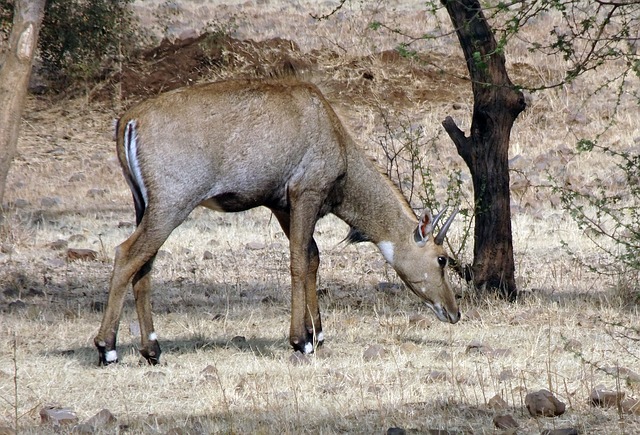 In fact "Nilgai" is not as meaningful a name for this creature because females are brown. Blueness is found in adult male color. It is a brilliant animal of gray color like gray or gray blue. His front legs are longer and athletic than the previous leg, with his back sloping backwards. Male and female have mane on the neck.

Males have a long and thick bunch of white hair on their necks and a white bandage below the knees on their feet. The length of the male from nose to tail end is about two and a half meters and height to shoulder is about one and half meter. It weighs up to 250 kg. Females are somewhat smaller. Only males have short, pointed horns that are about 20 cm long.

Nilgai is the largest of antelope species found in India. Deer are called animals that have permanent horns, that is, like deer antlers, their horns do not fall off each year and grow afresh.

Nilgai is a daylight (day-walking) creature. She also grazes grass and eats leaves of bushes. She also attacks the crops when given a chance. He likes to eat plum fruit. Mahu flowers are also eaten with great fervor. She stands on her hind legs to reach higher altitudes. He has good smell and sight, but hearing ability is weak. She lives in open and dry areas where prickly shrubs of low altitude are scattered. In such regions her predators are visible from a distance and she immediately runs away. Even on bumpy ground, she can run far and fast like a horse. She does not forget even in the thick forests.

All males come to the same place to pass stools, but females do not. At such places, a pile of feces gets collected. These piles occur in open areas, so that it can be easily seen around the stool and does not fall prey to hidden predators.

Nilgai have males and females wandering in separate herds most of the time. Males are also seen wandering alone. They are driven out of the herd by more powerful males. The females also have chowns.

Nilgai may appear to be a safe creature, but males are extremely quarrelsome. They often fight for females. Their way of fighting is also unique. By turning their waist upward like a command, they slowly revolve around each other and try to get close to each other. On coming closer, they sit on the knees of the front legs and push each other with their long and sturdy necks. In this way they look like giraffes while fighting with their necks entangled.

The more powerful male tries to strike his sharp horns at the backside of his opponent. When the weaker male begins to run away, the victorious male runs behind the fleeing opponent, flapping his broom-like tail like a flag in the air and bowing his neck. Thus the fighting males are completely oblivious to the surrounding events and can be taken very close to them. 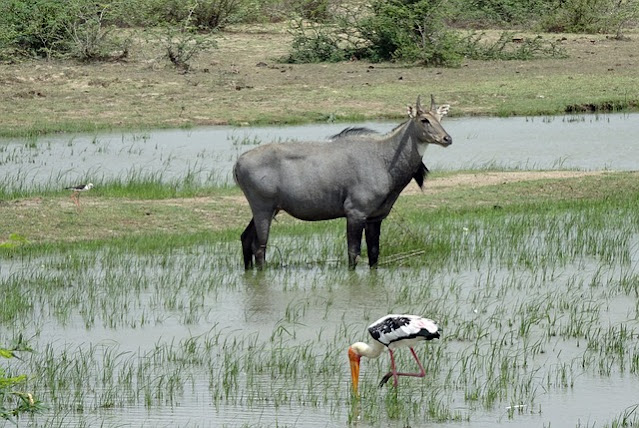 Each male occupies at least two females. Nilgai makes very little sound, but the female is sometimes bufflike. Nilgai binds the pair at any time of the year, but the main breeding time is November-January, when the blue-furred skins of males are in the most beautiful state.

After mating, the males separate from the females and form their own herd. These flocks also have minor males, whose skin is not yet blue and shiny. The herds of females have 10–12 members, but males migrate to larger herds, which can have up to 20 males. These include males of all ages, from small chowns to adult males. These males are very quarrelsome and keep trying repeatedly among themselves. When no one is found to quarrel, they kill their horns in bushes or on the ground.

Nilgai is extremely vigilant while grazing or sleeping. To choke she chooses open ground and lies back on each other. Thus, while lying down, one member of the herd keeps a watch on every direction. On seeing any danger, he immediately stands up and calls in a suppressed voice.

Chhauns are born in September – October when the height of the grass is high enough to hide them. These Chhau are able to stand only after eight hours of birth. Sometimes twins are born. All the females of the herd are raised together. When hungry, Chhau goes to any female and drinks milk.

Nilgai can also tolerate extreme heat and resorts to shade for a while to avoid the harsh sunlight. She does not need to drink much water because she gets the required moisture from her diet.

Nilgai is one of the many lucky creatures in India who are protected due to religious beliefs of the people. Since the word "cow" is associated with the name of this animal, people do not kill it as being the sister of a cow, although the Nilgai is quite damaging to the standing crop. It can be domesticated and a male carriage can be drawn lightly like a bull.